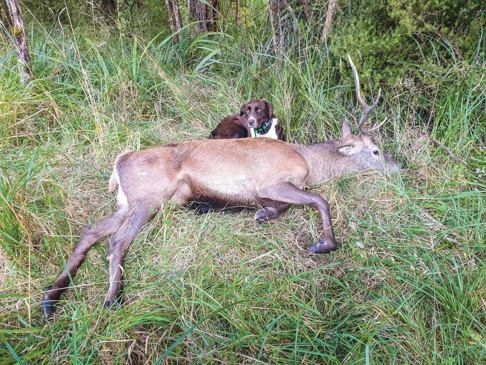 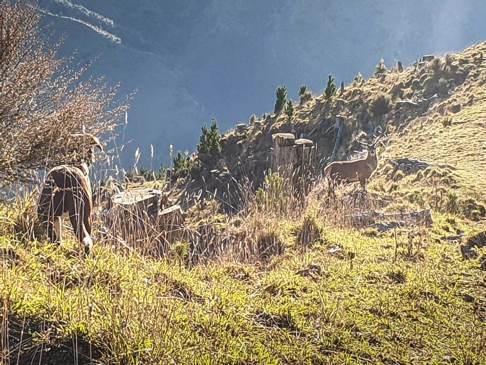 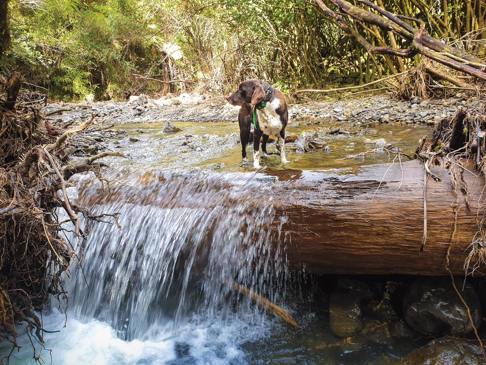 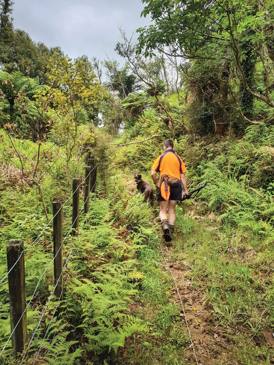 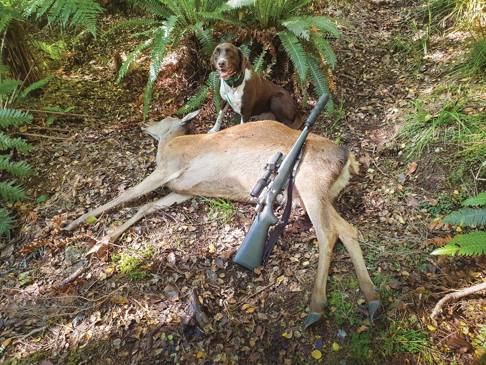 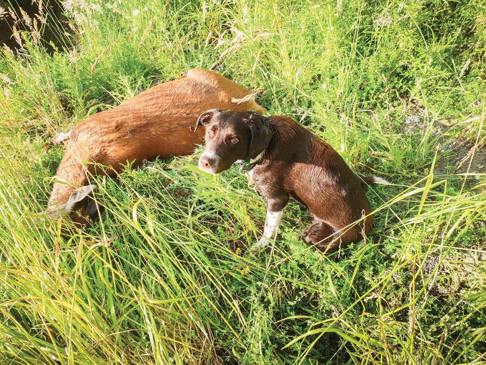 The dawn was breaking as I angled up a bush face. I intended to sidle around into a gently sloping gully where deer often fed on their way to bedding down higher up for the day.

Sami was keen as mustard and I had to give her a couple of reminders that we were a team, as she drifted a bit too far ahead. She settled into her routine and we began our hunt. She came and went and worked sign within ten metres of me as I followed a game trail. My hunt was a combination of hunting as I normally would without a dog, and also watching her for any indication of the proximity of game or a start for a tracking job off the ground or wind.

Half an hour into the hunt, Sami started to test the wind and show a bit of ‘keen’ down the face below us. At this early stage in her career (ten months old) she was quite subtle and was still figuring out what the boss wanted. I made the call to sit quietly for a bit and see what developed. Sami sat beside me and I started to scan 70m down through the open bush.

Nothing happened for a bit but then I noticed her fix on one spot and stare intently at it. I couldn’t see anything but I kept watch there. The first sight I got was the faintest of movements. My little Swaro 10x25s showed a different picture; a hind was feeding quietly as she drifted through the trees. The binos also picked up slight movements behind her that suggested other deer as well.

A shot was going to be tricky with the large number of slender tree trunks and I waited patiently for a chance. Eventually the hind paused with her neck visible between two trunks. I made the call to take the shot, even though neck shots are not my favourite option. The little 7.62x39 barked and the hind reeled at the sound of a solid hit. Sami remained rooted to the spot as she had been trained to do, while four other deer took off.

I waited several minutes for things to quieten down and then stood up and gave Sami the command to go in front. Off she went! A curt ‘In!’ (my in-front command) and a step on the long lead brought her back into line and down we went. She was keen as mustard and I managed her enthusiasm to ensure a consistent compliance with the job she was there to do.

We arrived at the spot – and what do you know – no hind. Shit!

Sami dropped her nose and I checked the site out to find a drop of blood. Good and bad, that. I marked the spot and we started to track, Sami in front, keen as, and me behind, ready to stand on the long lead if needed. I found two more blood spots and marked these and then Sami started to take me up a spur.

After 150m of careful tracking, I had not seen any more blood so I stopped for a think. I reached the conclusion that we might be tracking the remaining deer. I marked the last spot and then called Sami in and gave her a pat. Then we headed back down to the last blood site and started again.

This time Sami peeled off at the spur and followed a sidle track instead. A look revealed another blood spot. Excellent, we were on the right animal again. Sami followed this trail for approximately 100m through the bush, while I followed her, always looking ahead and to the side. She was getting a bit pushy and drifting out too far, requiring several reminders. She was keen, that’s for sure, but under good command.

We reached a little gut that had more cover and Sami tracked up on a faint game trail. I was slightly below her when the hind literally exploded out of some crown ferns and ran downhill right between us, no further than 3 metres away.A curt ‘Stay!’ was needed to ensure Sami stayed put and I made a visual check as well.

At 15m, the hind was in full flight but in a safe zone for where Sami was and my second shot somersaulted her end-over-end. I quickly looked back up to Sami and she was locked up solid on point and hadn’t moved a muscle. Excellent!

I called ‘In’ and together we went down to the hind, which was close by. A couple of metres from the deer I issued a ‘stay’ command and made Sami wait. When I was beside her, I let her go to it. She was super pleased with herself and so was I with her. This was the first real bush deer she had helped me with and she had tracked it up and stayed put when I finished it off. At only ten months old, Sami was developing nicely. A check of the hind revealed that it had a totally survivable flesh wound. Neck shots are not the best of options – too easy to miss.

That was a year ago, and there have been more than a few successful hunts since then. I had started shooting over Sami well before then but that hind was the real deal and one of those ‘this dog might be the goods’ moments. There have also been plenty of moments when I wondered whether she was too.

Last issue we talked about training and integrating as much as possible into the daily routine, and how it makes a huge difference. If you want to call this ‘interacting’ instead of training, so that you can count walks and activity around the house etc, I would estimate that I have a minimum of an hour’s direct interaction with Sami each day, as well as the time she is inside on the mat. There is usually more.

That adds up to a lot of time. Your dog both needs and deserves it. There is so much that a dog must learn as part of hunting that should be introduced over time before you start actually hunting. This is stuff you can’t teach in a paddock. You need to get out there. The list of experiences/skills your dog needs to have includes the following:

The most important thing is to introduce these experiences gradually in increments, and set your dog up for success. Young pups will naturally be more timid with new experiences. The trick is to make the right call on when the right time is to introduce things. With some things, starting early but small and gently is good, with others, start later when they are braver. You will know your dog and can make those calls. Don’t rush it. Softly, softly is the best way.

I hit a road bump with Sami as a 12 week old pup. We were down at the river and she attempted to join me in a swimming hole. She went straight under and came up blowing bubbles. It was totally my mistake – I didn’t think she would just walk out to me. She was already well bonded to me and she just assumed the water would take her weight.

That experience set her well back with water and it took me a long time and a lot of work to get her right around crossing creeks. She is still not a happy swimmer but she is OK with it. I own that 100%. You would think after owning so many dogs I would have been a bit smarter!

So I guess you’re all wanting an answer to the big question “When can I take my dog hunting?” I have four answers:

Some people say a dog must be a certain age for hunting, but no dogs are the same. The bottom line is that there is no rush in the first year. Getting the foundations set is the most important thing. Don’t worry, when your dog is ready to be hunted, it will need plenty of it, more than many hunters are prepared to do. The bottom line is that you will get out what you put in. Brains, breeding and biddability will also help ensure you get a return on your investment.

I would also add that I do not consider a dog to be mature until it is four years old. Dogs can do great things at age two, but they still have a way to go. The good ones often show their colours early and then get better with time, maturity and experience.

Remember to set your dog up for success. What does this mean? It means that you should not be expecting things of your dog that it is not old enough and/or not trained to deliver on. Simple really, but a rule that is often broken.

So when Sami and I had ticked the four boxes above, did I start her off hunting in the tight bush? Absolutely not! My preference would have been to start her on goats for a year, but I had better, closer access to easy deer, so I decided that ‘little and often’ was a good thing.

What did we do? Well to start with, we went hunting grass deer.

I had to endure a fair bit of ribbing from mates who are at the top of the game when it comes to indicator dogs and bush hunting, but I weathered it and did what was right for Sami. We hunted open country where I could place more emphasis on control and setting up long term habits for long term success.

I often shot deer across gullies and then worked around and got Sami to take me on the wind, exactly as you would hunt a ‘livey’. I also got her tracking blood trails to carcasses that had rolled down hills. We then moved to hunting bush edges and shooting deer that she pointed in the open. She was keen and a little bit noisy (just like the boss) and grass country enabled us to be successful as she learned her trade. It worked well.

As she matured, gained experience and got better at her craft, I upped the ante and we undertook more challenging hunts and terrain. She loved it. By the time we undertook the first real bush hunt at the start of this story, Sami had probably had 40 deer, goats and pigs shot over her. She knew what it was all about.

The other thing I would note is that just like a child, I did not expect Sami to have a concentration span of hours. We took regular breaks and made hunts short and fun. She did not run big miles on developing joints and when she started to lose focus, we went home, having a play on the way. I would often watch her young brain almost build up pressure from too much sneaking for too long and she would need a release. This has got longer and longer over time.

The more I hunt Sami and think back over all my dogs, the more I realise that you must be prepared to give your dog a lot of experience to ensure that she reaches her full potential. Can you do this on four trips a year? My opinion is ‘no’.

I haven’t quite got to where I wanted to as there is so much to talk about on this subject but I will leave it here for now and carry on in the next issue. Till then, stay safe.