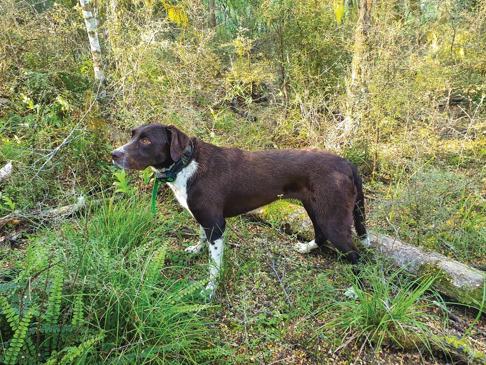 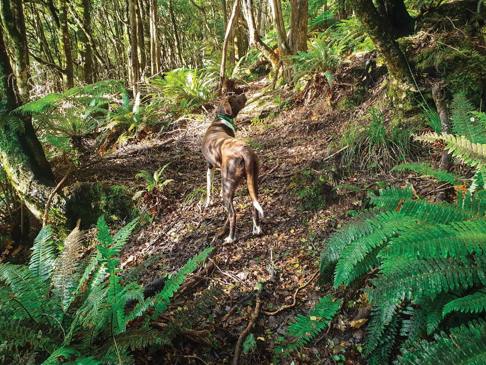 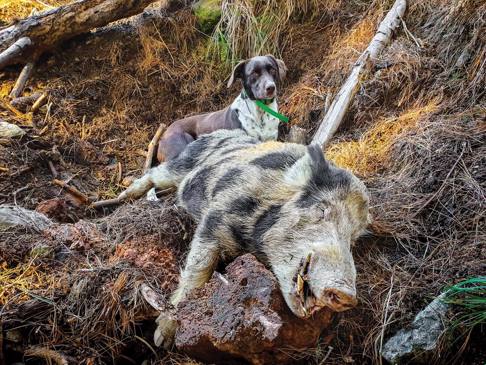 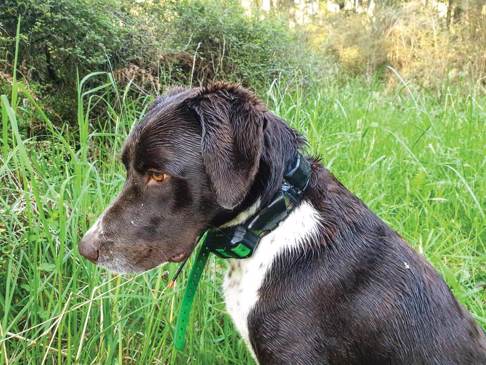 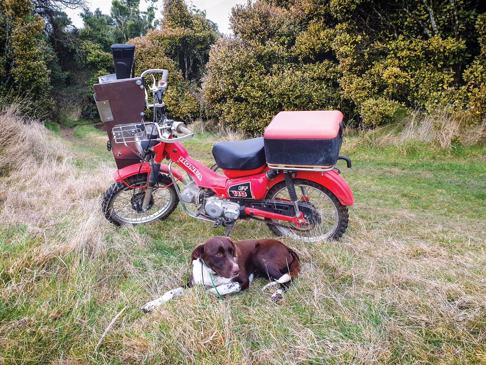 Last issue we talked about some of the other things you need to consider before and when getting your dog out hunting. I also included a wee story to demonstrate what Sami was capable of doing at what I consider to be a young age for an indicator dog. There is no doubt that she was doing well.

One point I would like to make here is that most of the best dogs I have seen showed their colours early and then got better with age (maturity) and training. The great thing about this is that a good pup will often be showing traits and mannerisms that you as a handler will identify as something that will in time lead to a dog with ‘the right stuff’. I reckon a young dog with the right stuff is twice as good at three years old as it was at two.

The other issue of a similar vein is when a handler fails to recognise negative traits that are part of the dog’s mental makeup and not just a young dog that hasn’t fully matured and developed. That can result in a lot of time spent on a dog that ultimately will not deliver what you want and need. Not good.

It would be really easy for me to sit here and write to you, my readers, of only the good stuff that happened with Sami. But that is not my way. The other thing is that we often learn the most from our biggest challenges. So, let’s have a wee chat about some of Sami’s and my issues.

There is really only one that sticks out, but it is at the very heart of what an indicator does and often the biggest issue many people face. It is that of distance. Now when it comes to indicator dogs, the dream many have is that of a dog that will sneak silently just five feet in front of you always and constantly check back to make sure you are keeping up. That is the ‘sexy’ version of indicating and was what my last bitch Xena was like. Sami was not.

When you look at Sami’s breed mix of half strong-eyed heading, quarter Springer and quarter wire-haired Pointer, there is a good chance you will get a busier-type dog, which I did. The reason I chose this mix is that I wanted a dog that was resilient, good in the cold, great-natured and intelligent. Sami has a heap of hunt drive, and she is a busier dog on the hill than Xena was, and a little pushy. She will work scent actively and constantly when we are hunting, which to start with frustrated me a bit. But here was a dog that was working scent really well for her age, and with some maturity and training would calm down and steady up. So, when I deemed her ready and under good command, we went hunting.

Sami loved it and showed a ton of promise. The road bump I hit, if you can call it that, was curbing her enthusiasm and keeping her within a range I was happy with.

She was under really good command and this was purely her enthusiasm for the task at hand. Another issue with young dogs is that if you are doing quick morning hunts etc to start with, then they will mostly be a bit more energetic. When you have a young dog that is on the ‘rangey’ side, there is also the added risk that they will spook game ahead, and possibly start chasing. With some dogs, if you cut them some slack, they will also take the distance further and further.

To be frank, I was somewhat frustrated with the way Sami was hunting and kept on her case. This with a young dog is also a fine balance between checking them to achieve what you need and going too far and taking their hunt drive out. You want the sweet spot that achieves happy compliance without removing hunt desire. Every dog has a different pressure level needed. What I found was that I was having to correct Sami quite a lot to keep her in my desired range. I used a long lead for silent correction for quite some time, but over time noticed that it really didn’t bother her.

In fact she was simply hunting out and waiting for me to set her range each time. That wasn’t going to work. Sometimes it is a case of constant repetition and consistency and the dog will figure it out as it ages and sometimes you also need to increase the pressure. When doing this you need to think it through carefully and trust your gut.

There is a wonderful little tool made by Garmin called a ‘Track N Train’ collar. This collar enabled me to give her a vibration if she was drifting out too far. Now that got her attention! Excellent. There was no noise and she was not put off her hunting. It was her sweet spot. Now she was much more aware of how far she went in relation to me. Happy dog, happy owner.

I have not written much on this but suffice to say that while we were working through over the course of a year, there were times when I wondered if Sami’s natural traits when hunting might mean she was not going to be what I needed. I spent a lot of time thinking about this and putting all my efforts into ensuring I gave her the best chance to be her best. Just ask a couple of my mates. I chewed their ears off pondering this at times.

One thing I had noticed throughout though, was that Sami had some really good traits. The first was her resilience and easy-going nature that made her a pleasure to spend time with in the bush. The other big one was that she was absolutely rock solid on point and post-shot (there was a printing typo in the last article that when read might have suggested possibly otherwise, but not so).

This was fantastic. I also helped reinforce this with a ‘stay’ command after the shot each time, to ensure that she never thought it wasn’t important.

So about six months ago I had yet another think about the way Sami liked to hunt and where we were at, and made a decision. I had done all I could to reinforce what I wanted, and she knew what that was. She had had a lot of animals shot over her and was maturing nicely. It was time to step aside a bit and let her put the fine edge on the way she naturally wanted to hunt and watch closely to see if that could fit in with what I needed. Sounds a bit flowery, but that is what I did.

I knew she wasn’t inclined to chase and that if that happened, I could fix it on the spot. I also knew that if she locked up, she wouldn’t move until I did my job and told her she could. So, I took my foot off the brake and let her range out further. Unlike when hunting Xena and zigzagging everywhere in behind, suddenly I could tick along on a straight-ish line while Sami worked it out. I still checked her a bit, but not half as much. Everything got more relaxed. Her natural range extended up to around 30-40m at times, which in bush is a fair way. Certainly not quintessential indicating distance at times, but quite often though it was still no more than 10 metres. I let her decide to a degree. I gave her the benefit of my doubt and carried on.

Very quickly we started to find our own rhythm. When tracking ground scent, Sami would work it well and find a lead out for us. She would be quite busy and come and go, but still check in to make sure I was keeping up. I could tell when we were getting close, as she would slow down. Not heaps and she was still marching in a bit much for my liking, but we were still killing animals. I suddenly found myself at times using my tracking gear to follow her through thicker bush when tracking, and several times it showed she was on point.

Usually when she went out of sight, I went from deer hunting to dog hunting. Now I was sneaking through bush until I could see a part of Sami. If she was locked up, I stayed put and looked really hard where she was looking. Binos helped here. I can think of a number of times where all I saw was an ear flick. There is no way I would have seen that animal if hunting alone.

Now instead of blundering along right behind her and alerting the deer, I was sometimes drifting along metres behind or off to one side and they had no idea that Sami or I were there. Or they were watching her and never saw me. Deer started being shot in their beds or whistled at to stand them up. There were also times when I shot one animal and Sami would not budge, knowing a second one was hunkered down in the same spot. She was great for this on pigs in the bush.

Suddenly my hunting got really fun and I found myself walking past deer in the open so that we could get into the bush to do it again. Interestingly, in the tussock she often tucks in behind and only drifts out when there is scent about.

Sami has just turned two years old and there is still a fair amount of water to go under the bridge before I can consider her experienced and trained, but we are on the way. I am a fussy bugger, and I am still watching for issues. She has her good and bad days just like me. As well as her amazing nose that I am now privileged to see the hunt through, her ears are getting me onto animals that I had no idea were there. There has been the odd gun shot over the years and I can seriously recommend a dog for the partially hearing impaired.

At the end of the day the best and main thing is that Sami is great company on the hill and a great mate to share the wild and not- so-wild places with. If I have to hunt without her for any reason, something big is now missing. I really hope that my experiences have helped some of you as you navigate and enjoy this process. As I have said, I don’t know it all, but hopefully there has been the odd snippet you can take away with you.

Next issue we will go on a couple of hunts with Sami. Till then.